Jane, the protagonist, and her best friend Lexi are trying to solve this mystery of why she keeps getting up early in the morning. Is she possessed or is this just a ghost telling her what to do in her mind? She has a funny and cool personality. At times she is really serious like when she started to realize something was happening in her new house. If you have a good sense of humour and like horror books or films like me, then you will definitely connect with Jane and enjoy Beyond.

I kept wanting to know what was going to happen next. I found this book really interesting. I recommend this book to somebody who is looking for a little scare. The author Graham Mcnamee has written a lot of other scary stuff such as Bone Chill, Defender, Acceleration and many other interesting books. 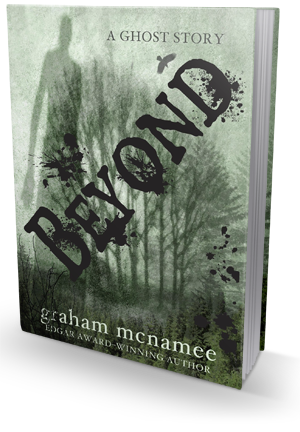 Notify me of new comments via email. She and her best friend Lexi call themselves the Creep Sisters. Only Lexi knows why Jane is different from anyone else: Her own shadow seems to pull her into near-fatal accidents. Jane is determined to find out why these terrifying things happen, and to overcome her shadow enemy. Her sleuthing with Lexi connects her own horrors to the secret history of a serial killer. Editor reviews 2 reviews. Creepy Possession! September 24, Overall rating. Jane has a history of self harm-- she swallowed poison as a child, almost was killed on a train track, and most recently, shot herself in the head with a nail gun.

Her parents keep a GPS monitor on her at night because she has also been sleepwalking. It's not her fault, though-- for years, she has felt as if her shadow is trying to kill her. Her friend Lexi who has creepy moments of her own believes her, because she was there when Jane could not get off the train track.


The nail stuck in Jane's brain would be bad enough, but after seeing a skeleton emerge from landslide while she is with her police constable father, Jane starts to realize that it's not her shadow that is trying to kill her, it's the spirit of Leo, a young man who was killed and buried in the woods. As Leo's control becomes stronger and stronger, Jane and Lexi realize that he is trying to get her attention to solve the mystery of his death. Even though they are in great danger themselves and Jane especially, since her brain injury gives her many troubles , they work on solving the mystery and bringing the perpetrator to justice.

Good Points. Jane's blackouts and feelings that her shadow are attacking her are portrayed in a way that makes them feel real and creepy. While the connection between her and the boy haunting her seem tenuous, the storyline is gruesome enough that everything works together.

I will buy this one for my school library. Report this review Comments 0 Was this review helpful to you? Suspenseful and Fast-paced. September 18, What I Loved: This is a well-paced, chills-up-the-spine horror book that kept me turning pages as fast as I could.

Beyond: A Ghost Story

The suspense is strong and creepy and scary! Especially after I got my first real glimpse of what haunts Jane. This author knows what he's doing when he crafts a horror story, and I particularly like that there's no blood and gore or really detailed nastiness. It's a great introduction to the horror genre for YA readers.


I also enjoyed the way the author wove flashbacks into the main narrative. That's a tricky thing to do, and he did it seamlessly. I was just as interested in the flashbacks as I was in the current narrative, and sometimes I was impatiently waiting for the next one because I hoped it would give me a clue to the mystery.

The friendship between Jane and her best friend Lexi is really well done. They behave like teen girls who have a strong sister-like bond, and Lexi is a fully developed character in her own right. I enjoyed that both Jane and Lexi have different interests and that we get a look at those differences and at the way they respect each other's talents. What Left Me Wanting More: I really enjoyed Jane and her narrative voice most of the time, but there were several instances where I either rolled my eyes or gritted my teeth in annoyance because whenever she thought about romance or her current crush, she thought about it how a man assumes a teen girl thinks about romance.

It didn't ring true at all. I was also irritated that Jane has an addiction to romance novels which is fine , hides them in the closet so she won't get teased by others less than fine, but ok , and then comments every time she picks one up that she must like them because she has a "lusty heart. Combine that with the very physical way she approached thinking about romance, and it felt like I was in a boy's head instead on those sections.

Not that girls don't think about the physical side of a romantic relationship, but it just felt And then she makes a comment about being a tomboy but still being capable of wanting a romance, and that made no sense. Being a tomboy means you enjoy outdoors activities and sports and things that have more traditionally been in the "boy" arena, but it has nothing to do with your emotional capacity for love.

For me, those few instances were the only parts of the book that didn't sweep me off my feet. Final Verdict: I really, really enjoyed this book. I think it's a great, fast-paced clean read for horror lovers and those who are new to the genre. I will definitely pick up the next book Mr.

Beyond by Graham McNamee - review | Children's books | The Guardian

McNamee writes. User reviews 1 reviews Overall rating. Already have an account? Log in now or Create an account. Beyond: A Ghost Story. June 14, I was not a fan of this book at all. I heard that if Stephen King wrote YA that it would be this book, and honestly it really wouldn't be. I love ghost stories and I was prepared to be creeped out since the description sounded really interesting and creepy but it left me bored. I wasn't surprised with this book at all. None of the twists were surprising at all and it ended up turning into a book that I went through as quick as I could just to get it over with.

I didn't like the characters or the ghost aspects or even the killer shadow. I felt that everything could have been more interesting but it just fell flat for me. I did not like Jane, she was boring and annoying. She was constantly getting on my nerves because she got annoyed that her parents were keeping such a close eye on her. I honestly can't blame them she's come close to dying numerous times and every single time the damage looks like it was self inflicted. So I'm sorry if I don't sympathize with your frustration because your parents are afraid that something is going to happen to you.

Don't even get me started on her best friend Lexi. She was just as annoying as Jane, if not more. She was supposed to be creepy and odd but I just found her character to be dull and boring. It was like her personality wasn't completely fleshed out and that is something that really bothers me. Overall, this book was a bust for me.